Mental Health in the Workplace

By Lori BennettMarch 12, 2020No Comments

Home » Mental Health in the Workplace 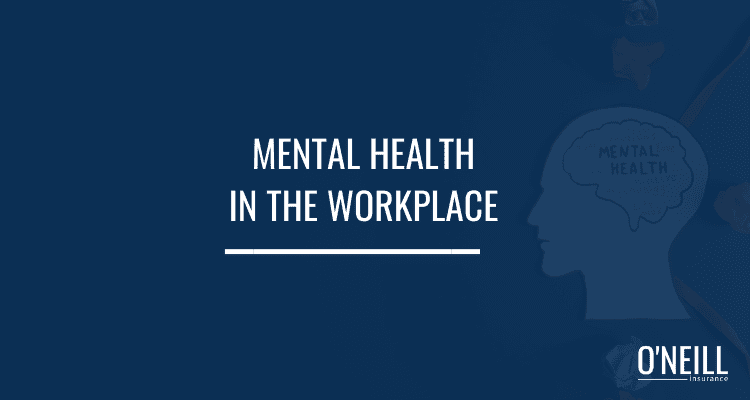 Employee mental health in the workplace has become a topic of increased focus and awareness in recent years.

An employee’s mental health includes how they think, feel, and act and includes their emotional and social well-being.

An employee can go through a period of poor mental health but not necessarily have a diagnosable mental illness.

Additionally, an employee’s mental health can change over time, depending on factors such as workload, stress, and work-life balance.

While 1 in 5 US adults experience mental illness annually, a recent study by Deloitte revealed that less than half receive treatment.

A study from the Mental Health in the Workplace Summit also found that mental illness is the leading cause of disability for U.S. adults ages 15 to 44 and that more workdays are lost to mental health-related absenteeism than any other injury or illness.

Given its prevalence, you can expect that employees at your organization are experiencing mental health challenges or mental illness.

That’s why it’s so critical that organizations create a culture that supports employees’ mental health.

While this may sound complicated, creating a workplace that is supportive of mental health and illness is easier than it seems.

This article serves as an introduction to mental health and provides several ways that employers can help promote a stigma-free environment and support employees’ mental health.

It’s not intended as legal or medical advice and should only be used for informational purposes.

Mental Health in the Workplace

An employee’s mental health includes how they think, feel, and act, as well as their emotional and social well-being.

Additionally, an employee’s mental health can change over time, depending on factors such as their workload, stress and work-life balance.

Employee Mental Heath By the Numbers

According to the National Alliance on Mental Illness:

Mental health is different for each of your employees and doesn’t just refer to mental illness.

As a result, major health organizations are referring to mental health as mental well-being.

According to the World Health Organization (WHO), there’s not a specific definition of mental well-being.

However, various studies agree that achieving a state of mental well-being includes being able to:

According to a study by the health benefits administrator Businessolver, 68% of employees fear that asking for help with a mental health issue could jeopardize their job security.

Moreover, while 50% of employees reported struggling with their mental health, only one-third of those employees asked for help.

The monetary repercussions of poor employee mental heath are tangible – costing the US economy nearly $226 billion each year in lost revenue.

Fortunately, your business can implement programs to help your employees cope with and manage their mental health.

When it comes to mental health conditions, there are a wide variety of illnesses with which employees could be struggling.

The following list isn’t all-inclusive or exhaustive but does provide a general overview of the most prevalent mental health conditions.

Familiarizing yourself with what employees may be going through is essential to educating yourself and managers on how to recognize the signs that an employee may be struggling and to destigmatize mental health at your organization.

Anxiety disorders commonly occur in conjunction with other mental or physical illnesses, last at least six months and can get worse without treatment. There are a few different types of conditions that are commonly classified as anxiety disorders: generalized anxiety disorder, panic disorder, social phobia and specific phobia.

In general, anxiety disorders are treated with medication, specific types of psychotherapy or both. Before treatment begins, a doctor must conduct a careful diagnostic evaluation to determine whether a person’s symptoms are caused by an anxiety disorder or a physical problem. Sometimes alcoholism, depression or other coexisting conditions have such a strong effect on the individual that treating the anxiety disorder must wait until those conditions are brought under control. Those with anxiety disorders usually try several different treatments or combinations of treatment before finding the one that works for them.

Everyone experiences feeling sad or being in a bad mood, but employees who suffer from mood disorders live with constant and more severe symptoms.

According to the Centers for Disease Control and Prevention (CDC), 1 in 10 U.S. adults suffer from some type of mood disorder.

Of the different types of mood disorders, depression and bipolar disorder are the most common.

Depression is a treatable disorder. The first step is to visit a doctor for a medical examination to rule out other factors that may be causing the condition, such as medications or a thyroid disorder.

Once diagnosed, a person will likely be treated with psychotherapy and/or medication. In the meantime, it is important to exercise regularly, participate in activities, spend time with friends and family, and think positively.

It is wise to postpone major decisions, such as marriage or a career change, until feeling better.

Symptoms of depression include:

People with bipolar disorder can lead healthy and productive lives when the illness is effectively treated. Without treatment, however, it tends to worsen.

Because bipolar disorder is a recurrent illness, long-term preventive treatment is strongly recommended.

A strategy that combines medication and psychological treatment is optimal for managing the disorder over time. If those methods are ineffective, electroconvulsive therapy may be considered.

In addition to the mental health conditions discussed above, there are a few other conditions employers should learn about.

Substance abuse is preventable and treatable, with recovery rates comparable to other chronic health problems like diabetes and asthma. If employers promote prevention, provide employee access to treatment and support employee recovery from substance abuse, they can help create healthier and more productive employees, workplaces and communities.

Having a mental illness issue does not guarantee you will be suicidal.

However, depending on the illness, it can make positive thinking much harder.

Suicide is a leading cause of death for Americans, but much like mental health in general, the topic rarely gets the attention it deserves.

There is a stigma against discussing suicide and mental health in the United States that hinders meaningful conversation about the topic.

Open dialogue is an important part of preventing these tragic deaths and establishing safety outlets for those in need.

Since 2000, suicide rates have increased by more than 28%, according to the CDC. In 2015, the most recent year in the data available, there was approximately one suicide every 12 minutes—totaling 44,193 deaths that year.

Beyond the human toll, the economic consequences of suicide are staggering. According to the CDC, one estimate put the economic cost at around $50 billion, while another had it near $93 billion annually. Factors like potential underreporting of suicide, total lifetime costs and per capita calculations were used in the estimates.

How Employers Can Help

Companies cannot expect employees with mental illnesses to “snap out of it” or wipe away thoughts of self-harm. Employers need to acknowledge that mental illness comes in many forms and that it probably affects more of their employees than they know. This is why employer-sponsored assistance programs are so important.

Employers should foster a safe environment that encourages employees to speak up if they’re feeling overwhelmed by work, as this is a significant stressor for depression and other mental illnesses.

Beyond reassessing company culture, organizations can offer referrals or access to mental health professionals through their employee assistance programs.

One of the most effective ways to reduce suicide is by being there for someone in need. With this in mind, consider empathy training for managers so they can recognize the warning signs of severe depression and can address them with the individual.

Have questions around how to incorporate mental health into your company’s group benefits plan?

Fill out the brief form below to contact our Group Benefits team.